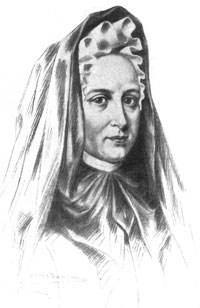 Madame Guyon was a French mystic and one of the key advocates of Quietism. Quietism was considered heretical by the Roman Catholic Church, and she was imprisoned from 1695 to 1703 after publishing a book on it, A Short and Easy Method of Prayer.

Madame Guyon’s warmest partisans after her death were to be found among the Protestants. It was a Dutch Protestant, the pastor Poiret, who began the publication of her works; a Vaudois pietist pastor, Duthoit-Mambrini, continued it. Her “Life” was translated into English and German, and her ideas, long since forgotten in France, have for generations been in favour in Germany, Switzerland, England, and among Methodists in America.

Concise View of the Way to God; And of the State of Union

A Short and Easy Method of Prayer

Spiritual Progress: Or Instructions in the Divine Life of the Soul