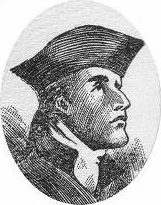 David Brainerd,, American missionary among the Native Americans, was born at Haddam, Connecticut.

He was orphaned at fourteen, and studied for nearly three years (1739-1742) at Yale. He then prepared for the ministry, being licensed to preach in 1742, and early in 1743 decided to devote himself to missionary work among the Native Americans. Supported by the Scottish “Society for Promoting Christian Knowledge,” he worked first at Kaunaumeek, an Indian settlement about 20 miles from Stockbridge, Massachusetts, and subsequently, until his death, among the Delaware Indians in Pennsylvania (near Easton) and New Jersey (near Cranbury). His heroic and self-denying labors, both for the spiritual and for the temporal welfare of the Indians, wore out a naturally feeble constitution, and on the 19th of October 1747 he died at the house of his friend, Jonathan Edwards, in Northampton, Massachusetts. Brainerd is believed to have died of tuberculosis.

The Life and Diary of David Brainerd

with Notes and Reflections by Jonathan Edwards.

In 1749, at Boston, Jonathan Edwards published “An Account of the Life of the Late Rev. David Brainerd, chiefly taken from his own Diary and other Private Writings”, which has become a missionary classic.

Brainerd’s “Journal” was published in two parts in 1746 by the Scottish Society for Promoting Christian Knowledge. His writings contain substantial meditation on the nature of the illness that eventually led to his death and its relation to his ties with God.